The Chickahominy is an 87-mile-long (140 km)[1] river in the eastern portion of the U.S. state of Virginia. The river which serves as the eastern border of Charles City County rises about 15 miles (24 km) northwest of Richmond and flows southeast and south to the James River. The river was named after the Chickahominy Indian tribe who lived near the river when it was claimed by English colonists in 1607 and whose descendants live in Charles City, VA today. The Chickahominy River is a Coastal Plain tributary to the James River with headwaters northwest of Richmond. For its first 15 miles (24 km) the Chickahominy flows over igneous and metamorphic bedrock of the Piedmont, but soon becomes a Coastal Plain stream near Mechanicsville. The low-gradient Chickahominy sluggishly flows through broad swampy lowlands for 40 miles (64 km) from Henrico County to eastern New Kent County. 4 miles (6.4 km) southeast of Providence Forge the Chickahominy River becomes an estuary and makes a turn towards to the south. When sea level was higher during warmer (non-glacial) periods in the Pleistocene the Chickahominy was a much broader river. The ancient riverbanks and meander loops are still recognizable. As sea level rose after the last glacial interval (during the last 20,000 years) the Chickahominy has also risen causing old flood plains and valleys to be backfilled as marshes. 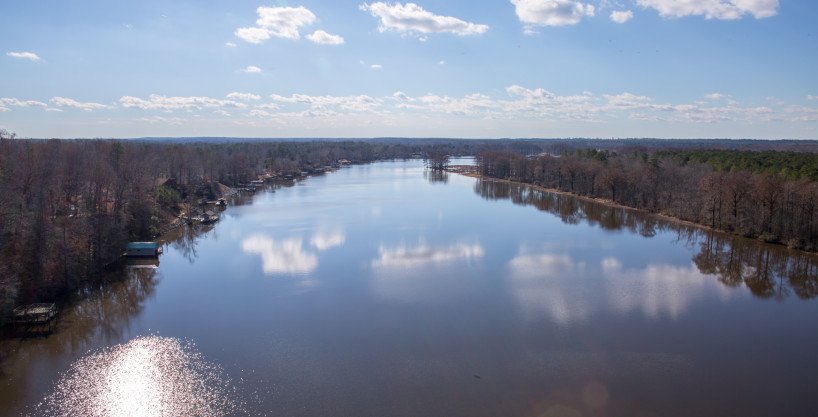