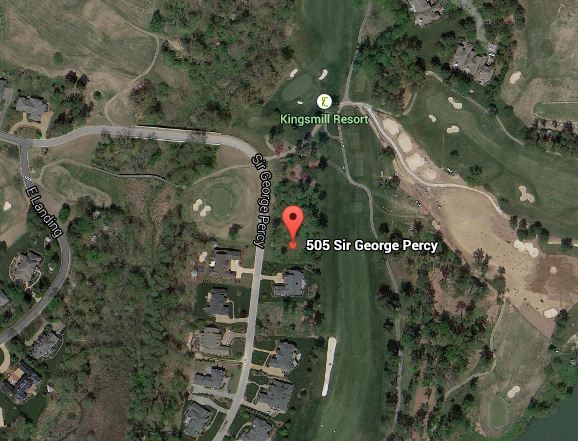 Welcome to Sir George Percy in the heart of Kingsmill in Williamsburg, Virginia. Kingsmill rest on the banks of the James River and offers an exlcusive and private lifestyle in an award winning golfing community. As a standard in Kingsmill you get multiple community pools, wonderful walking paths, security, management, and amazing views of the river. Additional memberships are offered at the Resort, which give you access to bonus amenities; pools, dining, spa, water sports, and golf.

Amazing lot on the 16th hole at Kingsmill’s famous River Course. Flat lot with good trees. Enjoy golf views, tee shots, and distant hints of the James River. Neighboring homes are fully custom and among the best in the area and all part of one of the most exclusive sections of Kingsmill behind Burwell’s Landing in Armistead Point.

Kingsmill is a name which has been used in James City County, Virginia since the mid-18th century. Initially the name of a plantation, in modern times, the name is attached to a geographic area which includes a large planned residential community, a resort complex, a theme park, a brewery, and a commercial park.

The Kingsmill area is located between the north bank of the James River just east (downstream) of the site where the first permanent English settlement in North America at Jamestown was established in 1607 and Interstate Highway 64. Highway access to most of the area’s many businesses and attractions is from U.S. Route 60 between the eastern city limits of Williamsburg and the adjacent community of Grove, or from Virginia State Route 199, which forms a semi-circular beltway of sorts around Williamsburg’s southern side.

A prominent member of the Virginia Company, Richard Kingsmill, became the namesake of the Kingsmill Plantation. The Virginia Company was a for-profit organization chartered in England which was charged with the founding and settlement of Virginia under the reign of King James I. Richard Kingsmill was given one of the first land grants of 300 acres (1.2 km2) in the southwest area of what later became a much larger plantation. In the mid-1730s, British Colonel Lewis Burwell III established a 1,400-acre (5.7 km2) plantation which he named Kingsmill Plantation. It included a mansion, outbuildings and garden. He was the colonial customs inspector for the upper James River. Along the river, Burwell’s Landing, site of his inspection station, also featured a tavern, storehouse, warehouse, and ferry house. Quarterpath Road extended between Burwell’s Landing and Williamsburg.

The Kingsmill area saw action during the American Revolutionary War. The house burned in 1843. Only the office and the kitchen still stand; they are among the earliest brick dependencies still extant in Virginia.

American Civil War – Some history about the area!

Action during the American Civil War (1861–65) also skirted Kingsmill Plantation lands. In 1862, Union troops under Major General George B. McClellan engaged in a failed attempt to seize the Confederate capital of Richmond. Slowly and carefully, much to the frustration of U.S. President Abraham Lincoln, McClellan assembled huge naval forces and a massive siege train of land-based troops, arms and supplies around a staging area based at the union stronghold of Fort Monroe at the tip of the Virginia Peninsula, where the harbor of Hampton Roads had been under federal control via siege for about a year already.

Forces under McClellan for what has become known as the Peninsula Campaign dwarfed all previous American expeditions at the time, transporting 121,500 men, 44 artillery batteries, 1,150 wagons, over 15,000 horses, and tons of equipment and supplies. An English observer remarked that it was the “stride of a giant.”

McClellan’s plan initially was to utilize the James and York rivers, especially the former, which was known to be navigable to Richmond, in combination with his land-based forces, to attack simultaneously and overwhelm the unknown resources of the rebels at Richmond. However, even as several months were spent through the winter of 1862 training new troops and bringing these many Union assets into position, the portion of the scheme which depended upon control of the James River ran into trouble. In March, the Battle of Hampton Roads between the first ironclad warships took place. Although the conflict between the two ships was inconclusive, the new technologies were to change naval warfare dramatically, and control of the harbor of Hampton Roads was brought into serious question.

Although the Union never lost control of the entrance to the harbor, and was able to retake Norfolk and Norfolk Naval Shipyard at Portsmouth shortly thereafter, it soon developed that Union ships were unable to move past heavily defended Drewry’s Bluff east of Richmond along the James River, and it appeared unlikely that situation would improve. That led McClellan to realize that his plan to take Richmond would almost certainly depend upon his land forces alone.

In early April, 1862, McClellan’s massive siege train began moving cautiously westerly up the Peninsula toward the Confederate citadel. Throughout the campaign, McClellan was convinced (erroneously) that he was facing much larger opposing forces than he was. At times, he even estimated these forces to greatly outnumber his own, frequently and bitterly complaining to Lincoln (his Commander-in-Chief), who had withheld from McClellan a much smaller force of federal troops to maintain a defensive position around Washington, D.C.

The Confederate strategy of the early portion of the Peninsula Campaign became one of delays, providing vital time for defenses to be built outside Richmond. The advancing Union forces were confronted with a series of three defensive lines erected across the Peninsula which were manned primarily by greatly outnumbered forces led by General John B. Magruder. The first, about 12 miles (19 km) north of Fort Monroe,

contained infantry outposts and artillery redoubts, but was insufficiently manned to prevent any Union advance. Its primary purpose was to shield information from the Union about the second line. Known as theWarwick Line, this second, and by far largest of the 3 defensive lines, was about a dozen miles east of Williamsburg, along the Warwick River, and was anchored by Yorktown on the north and Mulberry Island on the south. consisted of redoubts, rifle pits, and fortifications behind the Warwick River. By enlarging two dams on the river, the river was turned into a significant military obstacle in its own right. The third defensive line was a series of forts just east of Williamsburg, which waited unmanned for use by the army if it had to fall back from Yorktown.[5]

Although greatly outnumbered, defenders along the first and second lines under former thespian “Prince” John Magruder utilized the poor visibility available through the seasonally heavy undergrowth of the naturally-wooded and swampy terrain to utilize elaborate ruse tactics and intimidate McClellan and his leaders into fearing they were facing far larger forces than they were, greatly slowing their progress westward. Stephen Sears, the author of the To The Gates of Richmond, described the demonstrations of his limited troops, which included marching back and forth behind the lines with great fanfare to appear to be a larger force, as “performances of the Prince John Players.” Magruder’s efforts appeared to have the desired effect, as the ever-cautious McClellan moved very slowly with his forces, which were actually substantially larger than the those of the defenders, even after the arrival of the Army of Northern Virginia under General Joseph E. Johnston. Meanwhile, a long defensive line was being built outside Richmond. While there were several armed conflicts with loss of life, after finally overtaking the first line, and meeting only minimal resistance, before the Warwick Line, McClellan chose to carefully amass his troops and plan a major offensive, taking the better part of 30 days to do so. He carefully had huge cannons brought up the York River by ship and installed in a position favorable for his planned assault of Yorktown. Then, the very night before McClellan was finally positioned to launch his major offensive against Warwick Line, the Confederate troops quietly withdrew and retreated toward Richmond, via Williamsburg.[6] Discovering only empty works and Quaker gun in the abandoned fortifications on May 3, McClellan sent his cavalry troops racing after the escaping confederates. He also loaded a division of infantry aboard ships to sail up the York River to the west in an attempt to outflank the Confederate’s apparent retreat toward Richmond.

There were only two roads leading from the abandoned Warwick Line for the massive equipment and troops of the Union siege train to utilize in pursuing the fleeing Confederates, who had a head start. These were the Williamsburg-Yorktown Road and the Williamsburg-Lee’s Mill Road. They converged about 1-mile (1.6 km) east of Williamsburg. The weather had been rainy, and both armies slogged along the dirt roads of the sandy terrain, which undoubtedly only became only more muddy and even less easy to traverse.

The Williamsburg Line was the third line of defensive fortifications across the Peninsula. It was anchored by College Creek, a tributary of the James River, on the south and Queen’s Creek, a tributary of the York River on the north. Under the leadership of local farmer and president of the College of William and Mary Benjamin S. Ewell, a series of 14 redoubts were built along the line.[7] Named Fort Magruder, Redoubt Number 6, was the center of the convergence of the roads from Yorktown and Lee’s Mill, surely a key location. It was shaped as an elongated pentagon, with walls 15 feet (4.6 m) high and nine feet thick. The earthworks were protected by a dry moat nine feet deep. It mounted eight guns.[8] Several of the redoubts were located just east of the Quarterpath Road, which lead from Williamsburg to the landing for Kingsmill Plantation on the James River.

Despite the significant head start of the southern forces, cavalry forces from each side met, and began skirmishing on May 4. General George Stoneman’s cavalry encountered and began skirmishing with Brig. Gen. J.E.B. Stuart‘s cavalry, the Confederate’s rearguard. Learning of this, and frustrated by the slow progress of his own forces which were just then passing through Williamsburg, Confederate General Joseph E. Johnston detached a portion of his troops to confront the advancing Union troops. On May 5, 1865, the single-day Battle of Williamsburg took place. During the day, several groups

Although McClellan claimed a Union victory in his reports, and he was able to take the Williamsburg Line within slightly more than 24 hours, most historians rate the Battle of Williamsburg as a Confederate victory. Essentially, the Williamsburg Line had served its intended purpose. The primary goal of the defenders had been to enable to continued retreat of the main Confederate force to the defenses of Richmond, and this was accomplished. Another group of Union forces (the ones which had been sent up the York River by McClellan in another effort to stop the fleeing rebels) also met limited success. Their conflict on May 7 resulted in what became known as the Battle of Eltham’s Landing. However, in reality, that conflict in New Kent County was little more than a heavy skirmish. There were 194 Union casualties and 48 Confederate. The remaining battles McClellan’s effort would be fought either outside the gates of Richmond or during his later retreat to the protection of the Union Navy at Harrison’s Landing (better known in modern times as Berkley Plantation).of Union troops battled with Confederate

s near the Williamsburg line, with much of the action at or near Fort Magruder. Confederate casualties, including the cavalry skirmishing on May 4, were 1,682. Union casualties were 2,283.

From Wikipedia, the free encyclopedia